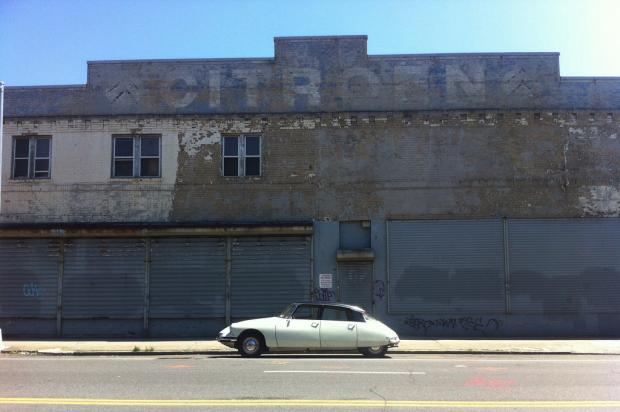 GOWANUS — Mon dieu! A piece of French history is about to disappear from Brooklyn.

A vintage sign for the French car maker Citroën on a Third Avenue warehouse is scheduled to be painted over this week, erasing one of the company’s last traces from American soil, Citroën history buffs said.

Among those bidding a sad adieu is Maurin Picard, a French journalist for Le Figaro newspaper who lives in Carroll Gardens.

To most passers-by the faded sign is barely discernible amongst the cracked bricks of the building’s crumbling facade, but when Picard spotted it shortly after moving to Brooklyn two years ago, his heart leapt with recognition.

He called the sign’s impending demise “heartbreaking,” and likened the relationship between the French and Citroën to a love story.

“People don’t realize how unique it is,” Picard said of the old Citroën sign. “It’s something that came from abroad, it lasted all these years, and now it will be gone forever.”

Like many of his fellow French citizens, Picard has had a lifelong obsession with Citroën.

The company is best known for two iconic models: the Volkswagen Beetle-esque Deux Chevaux, and the DS, which bears a resemblance to an aerodynamic tortoise. The futuristic vehicle was famously credited withsaving the life of French President Charles de Gaulle during a 1962 assassination attempt.

Picard is the proud owner of a Deux Chevaux named Juliette, which is currently stashed in a garage in the southwest of France. When he takes it out for spin in his home country, people inevitably smile and wave, he said.

“It’s just stunning — everybody turns and looks,” Picard said. “I don’t want to sound too cheesy, but there’s a love story between people in France and this company.”

Americans, however, did not share the same fervor for the Gallic auto.

Citroën made a foray into the U.S. market in the 1960s, but the bid failed for various reasons, and the company withdrew from the American marketplace in 1974.

Carter Willey, a Citroën mechanic with Dave Burnham Citroën near Albany, N.Y., worked as a teenager at the Gowanus Citroën facility on Third Avenue.

In 1968, the building was a “bustling” place full of French people, Willey remembered. It was both a repair garage and a parts warehouse where Citroën cars fresh from the port would be readied for American dealers.

Americans who bought Citroëns back then tended to be “reasonably affluent, highly educated, kind of arty people,” Willey said. Despite special features like front-wheel drive, in-board brakes and a hydraulic suspension system, Citroën didn’t take off with American consumers.

“It was an unusual choice,” Willey said. “These cars were expensive and odd, and service was not available on every corner. They were technically complex so they needed a special person to own them.”

Ngai was oblivious to the structure’s French connection until Picard alerted him to it.

While he was glad to get an automotive history lesson, Ngai said he can’t stop the antique sign from being painted over.

The Department of Buildings recently received a complaint about cracks on the building’s Seventh Street exterior, and an inspector issued a safety violation. Ngai says he has no choice but to stabilize the entire facade, a $60,000 expense that’s not covered by insurance.

Replacing the individual bricks would have been extremely expensive, so a contractor suggested coating the entire building with a thick, sandy stucco-like substance that will cover the Citroën sign on the building’s Third Avenue front.

The work has already been completed on the Seventh Street side, which had a smaller Citroen sign.

Ngai said he was eager to secure the crumbling bricks because they pose a safety hazard in a neighborhood that’s gone from “slummy” to “yuppie-ish” since his company moved to Gowanus in 1981.

“You used to have to watch your back because you’d be afraid,” Ngai said of his early days on Third Avenue. “Now, it’s people walking their dogs, kids with their parents…I should fix it for the safety of the kids. God forbid if something falls down and there’s a lawsuit.”

Luckily Citroën lovers still have a local outlet for their passion. A group of Citroën enthusiasts meets yearly in Manhattan on Bastille Day for a“rally and rendez-vous” through city streets. Drivers stop along the way at various French sponsors for snacks such as crêpes and pâté.

The group‘s co-founder Howie Seligmann said Citroën, which is still quite active in France, will always have a special place in the hearts of Francophiles.

“They’re not the fastest, but they are romantic.” 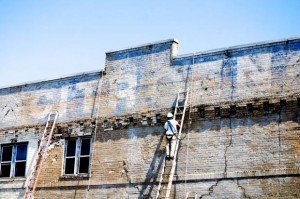