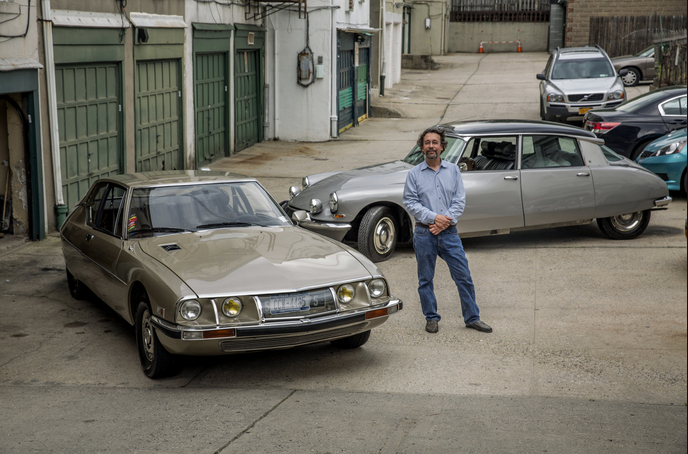 One Thursday last fall, Brian Brandt got a phone call from “The Americans,” the FX Networks’ period drama about Cold War-era Soviet spies living in a Washington suburb. An anxious member of the production staff explained that the show, filmed in a Brooklyn studio and at locations around Long Island, needed a car repaired — and back on the set the following Tuesday.

Mr. Brandt was among the few people around New York City who could service this rarely seen model, a Citroën DS. Distinctly French and with a shape said to resemble a flying saucer on wheels, the DS was last imported four decades ago.

The owner of a record label for contemporary classic and jazz composers, Mr. Brandt, 57, only recently added Citroën repair to his résumé. But his loyalty to the brand traces back 40 years. At 17, he bought a well-used 1966 DS for $300. He still owns it.

“I guess that was kind of strange,” he said. “Everybody else my age wanted muscle cars. But I had always admired Citroëns. I remember one on my grandmother’s block in the Bronx.”

Seemingly decades ahead of its time at its 1955 debut, the DS brought radical aerodynamic design and a novel hydropneumatic suspension that yielded an uncannily smooth ride.

Mr. Brandt, who lives in Manhattan with his wife, Alice Hom, used his DS as an everyday car for many years. At odds with the car’s George Jetson styling, performance from the lowly 4-cylinder engine was strictly economy-class.

That would not be the case with his next car.

In 1993, Mr. Brandt bought a much sportier Citroën luxury coupe from the 1970s, the SM. Car buffs call it the Citroën Maserati, a nod to the source of its V6 power. The unlikely pairing of a French car with an Italian engine resulted from Citroën’s ownership of Maserati in 1968-75.

Mr. Brandt’s years of using the SM, including parking it on the street in Manhattan, took a toll on the body and mechanicals. The car today awaits restoration.

In 2001, he bought a second SM, an impeccably maintained, original-condition 1973 model with just 40,000 miles. Garaged in Queens, it is Mr. Brandt’s “distance car,” now with over 100,000 miles. He adds about 6,000 more each year, with trips to Canada and to visit his son, Christopher, who attends the State University of New York, New Paltz.

A drive to the Brooklyn auto repair shop where Mr. Brandt rents space for his Citroën business started with a lesson in latching the two-piece lap and shoulder belts, a puzzle for first-time passengers. The design is not a French quirk, however; to meet federal regulations, Citroën bought the belts from Ford, Mr. Brandt said.

The Maserati V6 barked to life and settled into a lively growl at idle, sounds that might seem too energetic to those accustomed to the silken tones of modern luxury cars. A symphony of clicking and hissing, Mr. Brandt confirmed, came from the main hydraulic pump that pressurizes the car’s suspension and steering systems.

“The SM was designed at the same time as the Concorde,” said Mr. Brandt, referencing the Anglo-French supersonic airliner. “Both were made to bring prestige for France.”

The SM’s forte was relaxed high-speed cruising, not blazing acceleration. Its 3-liter 180-horsepower engine, shared with Maserati’s Merak sports car, had to move a 3,300-pound car. Like all Citroën cars since the 1930s, the SM used front-wheel drive.

En route to the Williamsburg Bridge, Mr. Brandt pointed out the Citroën’s eclectic mix of high design and French opulence. In place of a conventional brake pedal, there is a large round floor button — owners call it the champignon, the French word for mushroom — that responds to foot pressure, and its single-spoke steering wheel sprouting from a dashboard filled with oval gauges surely must have looked futuristic in the early 1970s.

Soft pleated brown leather upholstery and tasteful chrome accents create an ambience that falls between the relative starkness of a 1970s Mercedes and the lavishness of the period’s Jaguars. The curved front bucket seats are as comfortable as they look, and the 41-year-old interior surfaces show little wear.

At G&E Auto Repair in the Williamsburg section of Brooklyn, Mr. Brandt’s business partner, Winsley Thomas, was repairing a DS model. Mr. Thomas began working on Citroëns 50 years ago in his native Guyana, and he was a technician at the company’s United States headquarters in Englewood, N.J., from 1968 until operations ceased in 1977. The two met about 15 years ago, when Mr. Thomas was in Manhattan to repair a customer’s SM, which coincidentally parked in the same garage that Mr. Brandt was using.

“He’s been working on my cars ever since,” Mr. Brandt said.

Citroën specialists have all but disappeared from the area, and the remaining ones are widely scattered. A few years ago, Mr. Brandt decided to apprentice under Mr. Thomas, and the two now work on customer cars under the name Mode Motors. Local Citroën loyalists have kept them busy, although it’s not a route to riches.

“Doing the repairs brings in a little side money,” Mr. Brandt said. “I guess I have two impractical businesses. There’s such a lack of return in the record industry, but I still enjoy setting up recording sessions in concert halls.”

Mr. Brandt came to the recording industry by his love of music, not a career goal. A collection of recordings that began with progressive rock branched out to other genres, growing to some 8,000 albums.

After running his own mail-order business for rare records, Mr. Brandt worked for PolyGram records, building a catalog of imports. When he was 25, he started his own label, Mode Records, to record new music by John Cage, the American composer perhaps best known for his silent 1952 composition, “4’33”.”

On the drive back to Manhattan, traffic came to a standstill at 62nd Street near the approach to the F.D.R. Drive. Mr. Brandt took it in stride.

“I don’t mind getting caught in traffic, because I take the time to admire the car’s details,” he said, running his hand along the dashboard and window trim. “I feel like I’m surrounded by art.”

“It doesn’t get hot,” he said, pointing to the temperature gauge, which remained in the normal range throughout a 45-minute slog. “It’s always been a reliable car.”

He qualified that claim with the caveat that an SM owner must do a few mechanical upgrades to make it so. The key ones — modifications to the engine’s valves and timing chain — take an expert technician about two days to complete.

On the F.D.R., now mercifully free of backups, the SM glides fluidly over the notoriously broken and wavy surface. The tires, however, announce each impact with a noticeable “slap.” Mr. Brandt has since replaced the Michelin radials, which are made only in small batches for older European cars and cost $450 each.

Asked about the SM’s reputation for acutely quick steering, Mr. Brandt confirmed that its sensitivity demands a gentle touch from the driver. But he lauds it as a safety measure.

“I’ve avoided accidents by driving around problems that another car might not be able to,” he said. “Once you get acclimated to this car, nothing else you drive feels right.”

After crossing the George Washington Bridge into New Jersey, Mr. Brandt takes advantage of an open stretch on Interstate 80. The three-carburetor Maserati power plant sings at higher speeds, but even so, the answer to a query of which artists this music connoisseur plays on his car’s ’80s-vintage Blaupunkt stereo comes as a surprise.

“Even on long drives, I prefer to just listen to the engine,” he said.

Borrowed this from the New York Times. Here’s a link to the original story. 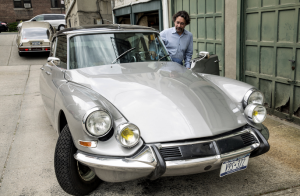 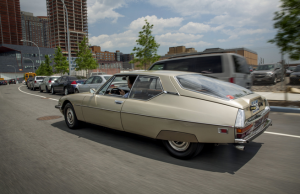 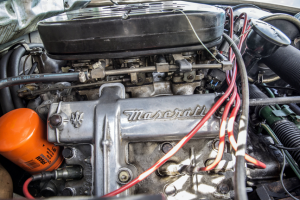 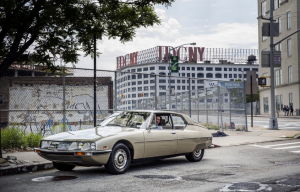